Montezuma was incorporated in 1854 after the community of Traveler's Rest relocated to be near the site of the new railroad. Montezuma was named for the famous Aztec leader by soldiers returning from the Mexican War (1846-48).

Downtown Montezuma is on the National Register of Historic Places with architecture dating back to the 1850s. Situated on the east bank of the Flint River, downtown restaurants offer visitors a variety of dining options, and an old-time grocery store specializes in country meats and hoop cheese.

Macon County High School is located in Montezuma, Montezuma is also home to the county's newspaper, the Citizen-Georgian, the armory of Bravo Company, 648th Engineers of the Georgia Army National Guard and a thriving Mennonite community started when a small group of Mennonite families moved here from Virginia in the 1950s.

Montezuma has survived several floods, perhaps the greatest of which was the flooding of the Flint River in 1994. For the past 20 years the city has hosted its annual Beaver Creek Festival to commemorate the spirit of courage that has revived downtown from disasters since the late 1800s. The festival sprung from the devastation of that 1994 flood which swamped this community, but not its spirit.

Although there are stories referencing a flood in 1897, the earliest recorded disaster was in 1902 when the Flint River crested at 25 feet. The levee was built to retain Beaver Creek following the 1948 flooding of the business district. In 1958 the levee was engineered three feet above 1929’s 26.3 foot record, but it was no match for 1994’s 30 foot crest which poured Beaver Creek into downtown's historic buildings.

Initially called the "Flood Festival," it was established by the Montezuma Merchants Association when the "Flood of the Century" receded and left waterlogged stores and ruined inventory. The Festival was launched to help raise capital to support the rehabilitation of historic downtown and the Railroad Depot.

The annual celebration is staged in Charlie Jackson Unity Park -- a once thriving city block reduced to rubble by fire. A volunteer squad cleared the ashes and had a stage, arbors, a wall of fame and a sparkling fountain installed. The fountain and park symbolize the community's commitment to historic preservation and revitalization.

The grand finale is a duck race fundraiser hosted by the Chamber of Commerce to rekindle the spirit of revival required to recover from disaster.  A flock of colorful ducks is launched by the Montezuma Fire Department into Beaver Creek to race downstream to the finish line at the North Dooly Street Bridge. 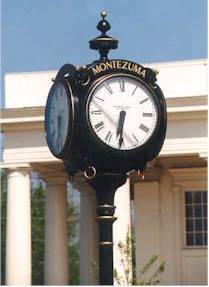